This article is part of the series "Writing Bazel rules".

In the last article, we built a go_binary rule that compiled and linked a Go executable from a list of sources. This time, we'll define a go_library rule that can compile a Go package that can be depended on by other libraries and binaries.

This article focuses on rules that communicate with each other to build a dependency graph that can be used by a linker (or a linker-like action). All the of the code is from github.com/jayconrod/rules_go_simple on the v2 branch.

Once again, you don't need to know Go to understand this. I'm just using Go as an example because that's what I work on.

Before we jump in, we need to cover three important concepts: structs, providers, and depsets. They are data structures used to pass information between rules, and we'll need them to gather information about dependencies.

Structs are a basic data structure in Starlark (technically, structs are not part of the Starlark language; they are provided by Bazel). A struct value is essentially a tuple with a name for each value. You can create a struct value by calling the struct function:

You can use the dir function to get a list of field names of a struct. getattr and hasattr work the way you'd expect, but you can't modify or delete attributes after they're set because struct values are immutable. There are also to_json and to_proto methods on every struct, which you may find useful.

A provider is a named struct that contains information about a rule. Rule implementation functions return provider structs when they're evaluated. Providers can be read by anything that depends on the rule. In the last article, our go_binary rule returned a DefaultInfo provider (one of the built-in providers). This time, we'll define a GoLibraryInfo provider that carries metadata about our libraries.

You can define a new provider by calling the provider function.

Bazel provides a special purpose data structure called a depset. Like any set, a depset is a set of unique values. Depsets distinguish themselves from other kinds of sets by being fast to merge and having a well-defined iteration order.

A depset comprises a list of direct elements, a list of transitive children, and an iteration order. 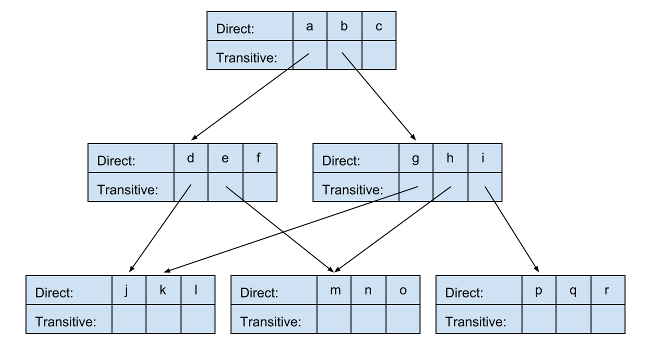 Ok, the theory is out of the way, let's get to the code.

First, we'll define a new provider. GoLibraryInfo will carry information about each library and its dependencies. We'll define it in a new file, providers.bzl.

Technically, we don't need to list the fields or provide any documentation here, but we may be able to generate HTML documentation from this some day.

Now we can define the go_library rule. It uses the same go_compile function as go_binary. Here's the new rule declaration in rules.bzl.

Here's the implementation of the rule.

First, we use declare_archive, a new function defined in actions.bzl, to declare our output file. (For curious Go users, an archive with the import path github.com/foo/bar will be named rule_label%/github.com/foo/bar/baz.a. We can pass the directory rule_label% to the compiler and linker with -I and -L flags respectively so that the archives may be found. -importcfg is a better mechanism for this, but I didn't want to complicate this article too much.)

Next, we compile the library using our go_compile function from before. We access the list of source files through ctx.files.srcs, which is a flat list of files from the srcs attribute. Individual targets in srcs may refer to multiple source files (for example, if we refer to a filegroup or a rule that generates source code), but we just want a flat list. We access dependencies through ctx.attr.deps, which is a list of Targets. Providers can be read from a Target with a subscript expression (dep[GoLibraryInfo] above).

Finally, we return a list of two providers, DefaultInfo and GoLibraryInfo. The GoLibraryInfo.info field is a struct with information about the library being compiled. It's important that this struct is immutable and is relatively small, since it will be added to a depset (the GoLibraryInfo.deps field of other libraries) and hashed.

There was an important change to go_compile and go_link. Did you catch it? Both now accept a deps argument, a list of GoLibraryInfo objects for direct dependencies.

go_compile uses this to generate -I flags for the compiler (import search paths). The compiler only needs search paths for compiled direct dependencies.

go_binary now includes a deps attribute and calls go_link with GoLibraryInfo providers from those targets. I won't reproduce the entire source here because it's a very small change from last time.

All our definitions are in an internal directory, and we need to make them available for other people to use. So we load them in def.bzl, which just contains our public definitions. We expose both go_library and GoLibraryInfo. The latter will be needed by anyone who wants to implement compatible rules.

You can test this out with bazel test //tests/....